This event has already taken place! Please make sure you are in the correct year. ×
Jul
24
Wednesday
Jul
24
Wed 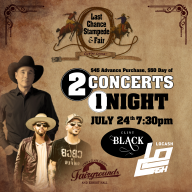 With two albums and eight charting singles to their credit, LOCASH broke out in 2015 with their gold certified hit, “I Love This Life,” followed by their number one smash, “I Know Somebody.” In 2017, they earned their first round of awards show recognition, nominated at the ACM Awards for New Vocal Duo or Group of the Year, the CMT Music Awards for Duo Video of the Year, and the CMA Awards for Vocal Duo of the Year. Their latest single is the Top 30 “Feels Like a Party.”

After thirty years of “killin’ time,” Clint Black is ready to celebrate. The multi-million-selling country icon is set to embark on a tour commemorating the thirtieth anniversary of his debut album, Killin’ Time.Put Yourself in My Shoes followed his first album, and then a string of platinum and gold albums throughout the 1990s. Most impressively, Black wrote or co-wrote every one of his more than three dozen chart hits, including “A Better Man,” “Where Are You Now,” “When My Ship Comes In,” and “A Good Run of Bad Luck.”